Jeni, Cass, their two kids, Draeden and Emma, and their dog, Saydee, moved to Sarilia on February 14th this year, and it was “probably the best Valentine’s Day gift ever,” says Cass. They moved here from Saskatoon, but they’d had Sarilia in their sightlines for several years—ever since Jeni’s brother Brad and sister-in-law Tessa moved their own family here from the city.

We recently chatted with the couple to find out what enticed them to move out of the city, what their kids think about their new home and what their plans are for their first Sarilia summer. 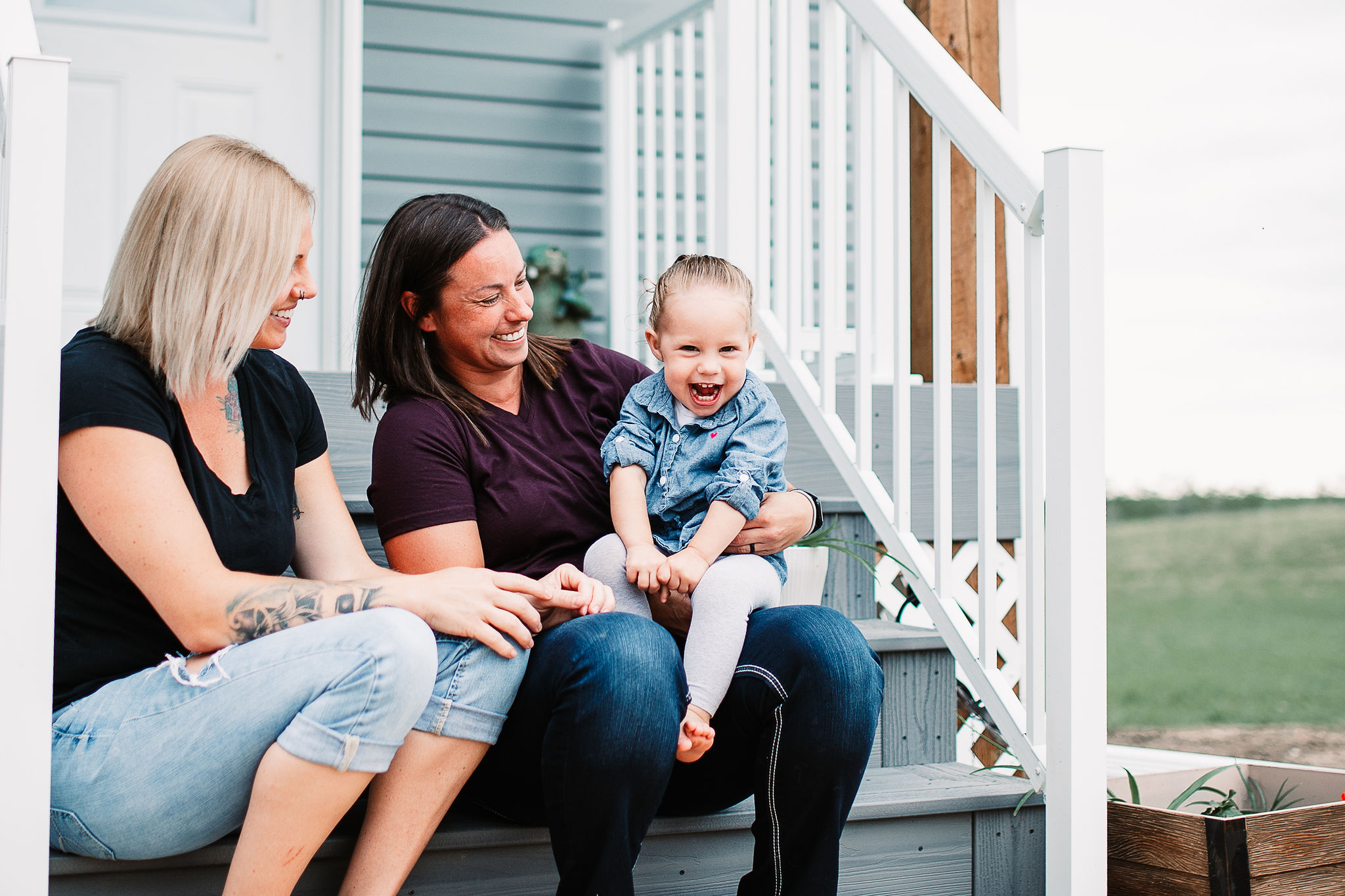 Did you look at other developments and acreages around Saskatoon?

Cass: We did look at acreages, but once Brad had scoped out Sarilia, and showed it to Jeni, she had her heart set on it. That would have been six or seven years ago. And then, when we met, she brought me out here, and I was like, “oh my goodness, this is beautiful.” Once we really looked at it, we knew we wanted to be out at Sarilia.

Was there something specific you were looking for in regards to a new home?

Cass: We wanted space—a bigger yard. We didn’t want to be side-by-side with our neighbours. Just to get away from the pavement and be out in nature.

After talking to Gwen, we knew it was the type of community we wanted to be a part of. It has a small-town feel, and like-minded people. There are lots of young families, so we knew there would be kids who would be going to school with Emma—kids that she would grow up with. There were so many pros.

Were they any particular features that attracted you to Sarilia?

Cass: The river was definitely number one for us. That’s why we built our house right on the riverbank. We wanted to be as close to the river as possible.

How has your lifestyle changed since moving from the city to Sarilia?

Cass: The main difference is just being out in nature and having that ability just to go out and be exposed to fresh air. It’s very quiet and you can hear the coyotes. We had a moose pass the front of our house the other day. You can hear the owls. You can hear the geese. You don’t hear people—you just hear nature.

What do your kids think of about living at Sarilia?

Cass: They love the space. There’s so much more to do out here versus being in the city. We’ve always been very outdoor people, so it’s given us a lot of freedom to be out and exploring. We’ve got a pet beaver down on the river trail that we see often. It’s a cool experience being back out in the country. It’s exactly how I grew up and I’m so excited for my kids to grow up in the same type of environment.

Jeni: It’s almost like letting kids go back to being kids. In the city, you always have to keep a close eye on them—watch where they’re going, and pretty much be with them all the time. When we’re out here—not that we’re not paying attention to what Emma’s doing—but we can sit on the deck and she can run and play around and we’re not concerned that there are dangers lurking around the corner. We both grew up on a farm/small town, so I think it’s just great for kids to have all that nature to explore and not have to be cooped up inside.

What do you think the transition has been like for your dog, Saydee?

Cass: Saydee is very happy to be out in the country. As a family, we love going out for walks on the river trails and just out on the road to get some exercise. She just has so much more freedom being out of the country and she loves to swim in the river.

What was it like to work within Sarilia’s design standards when you built your new home?

Jeni: We are happy with how (our house) looks and we’re actually glad that there are standards because it makes the houses look that much more appealing.

Did you have concerns about using a septic and cistern system?

Cass: We weren’t concerned because of where we grew up. Jeni has a septic tank on her farm where she grew up, and where I grew up (at Crooked Lake), we also had a septic tank so it was nothing new to us. And (with the cistern system) you don’t even have to be home when they deliver your water. You just tell them how much you need and they fill up your tank—it’s simple.

We also put in a great greywater system, (which means) our freshwater is recycled to be used in our toilets, so we don’t go through a lot of water. I think we’re on week 12 right now without a septic pump-out so we’re doing really well. The greywater system isn’t a requirement at Sarilia, but you’re definitely saving a ton of money in the long run if you install one.

What activities do you plan to do at Sarilia this summer?

And we have a canoe so we are definitely going to be out on the river. Maybe try a hand at fishing. There’s so much to do—we’re just so excited for our first summer.

What has the commute to work in Saskatoon been like for you both?

Jeni: It’s really not that far. It’s about 25 minutes and pretty much double lane the entire way. When we were living in Willowgrove it was still a 15-18 minute commute so what’s an extra seven minutes to be out at Sarilia? It’s well worth the extra seven minutes.

Cass: Honestly, it’s the greatest thing to see the lights of the city in your rearview mirror.

Welcome to Sarilia’s little corner of the Internet. Our blog will chronicle the tips and tricks of home building, interior design and décor, DIY and a dash of the good life – whether it be food, gardening or outdoor adventure. We aim to address the questions people ask about river valley living and the vibrant lifestyle Sarilia offers. Our posts are written by Gwen Lepage, Sarilia’s owner and developer, and Julie Barnes, Sarilia’s chief creative officer.